Hagley: Who Put Bella in the Wych Elm? 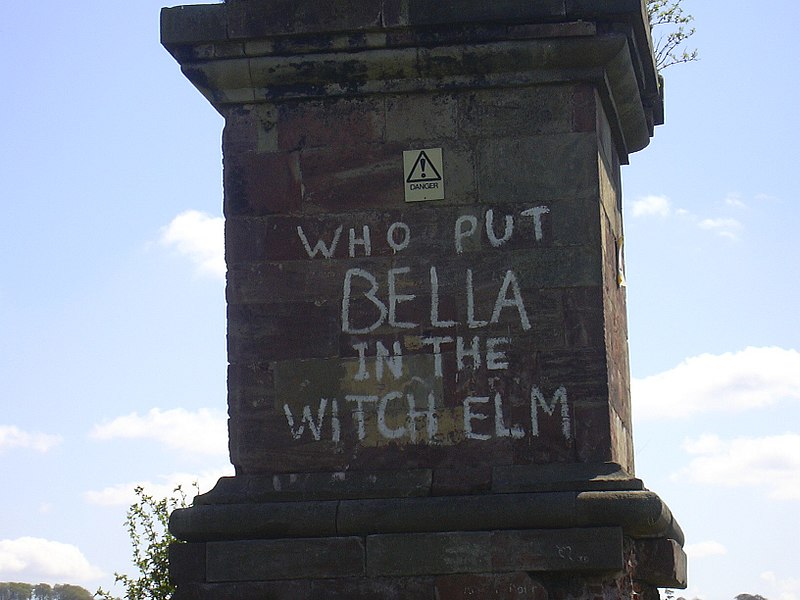 You might be visiting Hagley Hall in Worcester. It’s an astonishingly magnificent stately home. It’s totally gorgeous, historic, set in wonderful parkland and gives you a very special glimpse into the lives of the aristocracy in the days when luxury was a perfectly normal and natural way to live in such surroundings. You can find out more at the website.

But a grisly murder took place there during the Second World War. A young woman was murdered, her body hidden in a tree on the estate and although the discovery was investigated, the murder has never been solved.

Yet mysteriously, graffiti appears regularly on an obelisk locally.

Not only was the murderer never found, the body was never identified either. So where did ‘Bella’ come from? The graffiti that appears (and it’s been seen in other places locally) always refers to the murdered woman as ‘Bella’ or occasionally ‘Luebella’.

And although reports of the murder referred to the body as being found in ‘a tree’ the graffiti specifically mentions a wych-elm. (This may have been reported also but the detail makes some people think that the graffiti is the work of the killer).

The graffiti first appeared on a wall in Birmingham in 1944 – not too long after the discovery of the body. It was seen in other places locally too.

The police estimated that the woman had been killed in about 1941. The pathologist believed that she had been dead for just under two years when the body was found. It was found by four young lads who were up to no good on the private estate – poaching probably – so they had not at first reported their discovery.

Despite the trail being cold by the time the body was found, two people came forward who claimed to have heard a woman screaming one night at about the time the woman was killed.

But she was never identified, despite the fact that the police and the pathologist were able to find out quite a lot about her. This meant that her killer was never found also.

There are several theories-some bizarre and some a little too supernatural for my liking but a good one is that ‘Bella’ was a spy from overseas (usually Holland) who was set to work to uncover mysterious Nazi goings-on in the area. She was, this conspiracy theory claims, successful so she was silenced in the most permanent way.

Whatever the truth of the situation, and the chances are that we’ll never know, if you’re visiting the glorious Hagley Hall, it’s an interesting detour. And you’ll have a fascinatingly spooky story to relate to your companions.

HOW TO FIND HAGLEY HALL AND THE GRAFFITI OBELISK