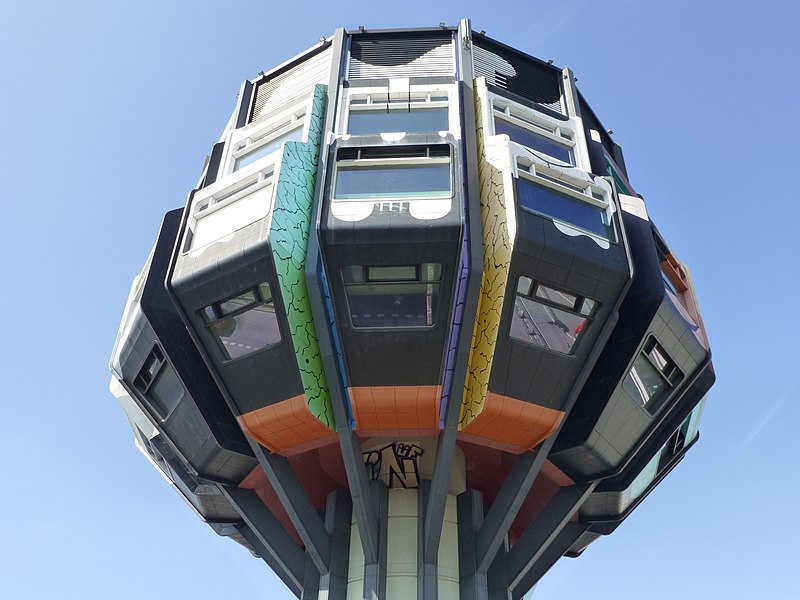 I imagine it’s one of those Marmite things – you either love it or hate it. I think it’s rather splendid, the Bierpinsel. This building, dating from the 1970s, is supposed to ‘look like a tree’ (truly) but from day one has been known as the Bierpinsel.

‘Bierpinsel’ means, evidently, ‘beer brush’ and I’m a bit lost on that one because I don’t know what a beer brush is or why anyone would want to brush their beer for that matter. At the time of writing, it’s an abandoned building but in its time has housed restaurants, bars and nightclubs, none of which has been a lasting success.

It was originally a shocking pink (just like trees, right?) but has been made over by street artists from around the world. The architects, a married couple, didn’t approve – presumably preferring the pink. Yet to me, it perked up the building considerably.

In 2010 though, several prominent street artists painted the exterior of the beer brush; a project that was called Turmkunst  (in English, tower art). However, it still looks slightly precarious. It looks to me that it could fall over quite easily but it’s stood the test of time.

A couple of years ago the Bierpinsel was up for sale, priced at several million euros, although nothing seems to have advanced on the restoration front. Is it Berlin’s white elephant or a pop art error? Well, I guess it’s in the eye of the beholder.

WHERE IS THE BIERPINSEL?