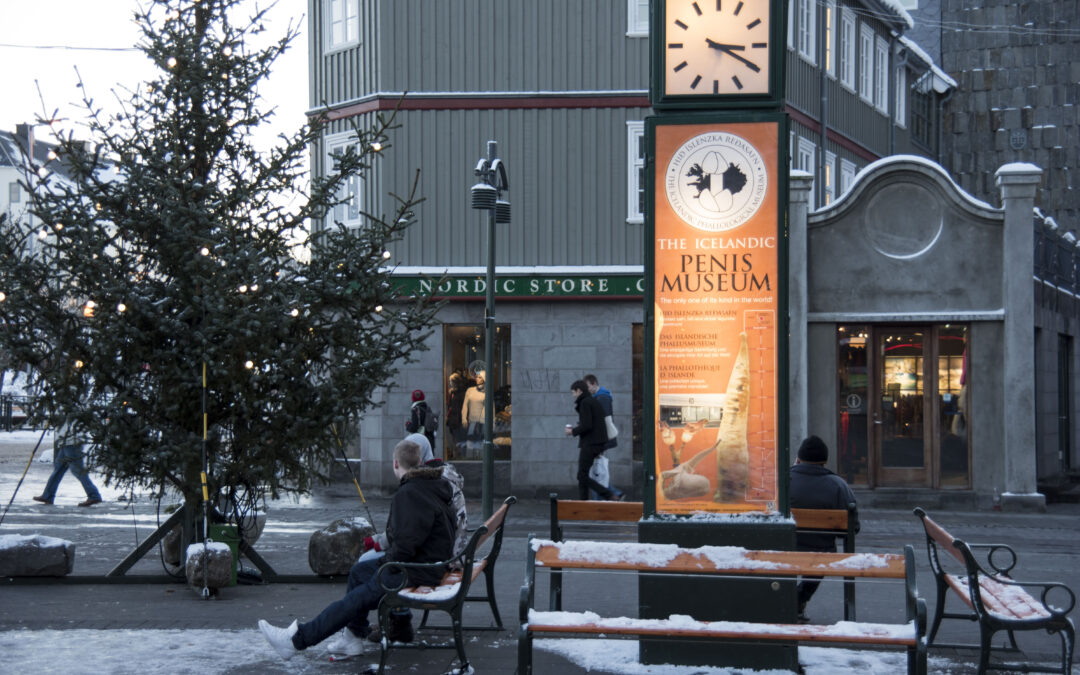 An online thesaurus has 493 synonyms for the word ‘penis’. You might be amazed by that. I am. (You can see them here … if you like.) I admit that I found that many of them were completely unknown to me. But I bet that Sigurður Hjartarson is familiar with many.

You see, he founded the Icelandic Phallological Museum in Reykjavík.

You might ask why? (I did). And it seems – and this is a lovely quote from the museum’s Wikipedia page – that

Now that we all have that information, then it’s probably better that we simply forget it; I don’t know about you but I don’t want to dwell on the subject any further.

In addition to the human and animal penises in the collection (there are over 300) there is also a mythology collection featuring the willies of trolls and elves. Although they are on display they cannot be seen because trolls and elves are invisible. I am not making this up.

Scroll down to see a video tour.

Sigurður was assisted by his family, though not without some occasional embarrassment. His daughter Þorgerður recalls that she was once sent to a slaughterhouse to collect a specimen but arrived just as the workers were taking a lunch break: “Someone asked, ‘What’s in the basket?’ I had to say, ‘I’m collecting a frozen goat penis.’ After that I said, ‘I will never collect for you again.’

According to Sigurður, “Collecting penises is like collecting anything. You can never stop, you can never catch up, you can always get a new one, a better one.”

He intends to continue acquiring new penises because you can “always get a better, newer one … a bigger size or better shape, you know?”

Its largest exhibit is a portion of a blue whale’s penis measuring 170 cm (67 in) long and weighing 70 kilograms (150 lb),[17] which Iceland Review has dubbed “a real Moby Dick”

Sigurður has described the collection as the product of “37 years of collecting penises. Somebody had to do it.”

The museum’s guest book includes comments such as, “I’ve never seen so many penises–and I went to boarding school!”

Sigurður has considered donating his own penis to the museum when he dies but said that it depends on his wife: “If she dies first, my specimen would go in here. If I die first, well I can’t say. She might say no.”

It would be a shame to be in Reykjavíkand not to drop into the museum if only to assure yourself that it really exists.

← Racing Circuits - Around the World Enforcing Rules in Your STR Rental →

Trending Now : What Is Swimply?