If You Ever Find Yourself At Barons Court… 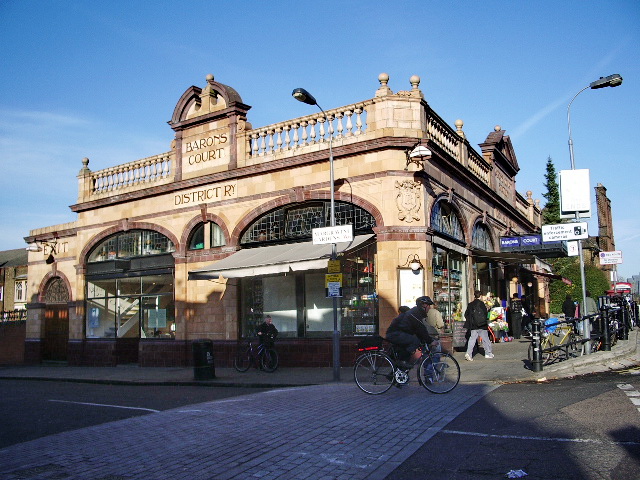 … then here’s a story to tell your companions.

Baron’s Court is a tube station in West Kensington, London. The building itself is intriguing. The station opened in 1905 and features a terracotta facade and that lovely Art Nouveau lettering.

However, the story concerns an old man who was in the station just a few days before Christmas in 1985. No one knows exactly what he was doing there but it’s likely that he was on his way to do some seasonal shopping.

Several people saw the man collapse. He’d had a massive, fatal heart attack. And he didn’t have any ID with him. He couldn’t be identified.

There were only two faint clues though. The man wasn’t European in looks; he looked to be from the East. And in his pocket was a piece of paper, possibly some sort of letter, written in an unknown alphabet. A mystery indeed for the Metropolitan Police who sent the paper to the University of London, Could they identify it?

Eventually, the strange characters on the sheet of paper were identified as being in Thai. See below for an example. Now imagine that and then imagine that you’re a London bobby trying to understand it…

I guess you see what I mean.

Imagine a sheet of paper covered with that script – goodness knows what the cops thought it was.

It was a letter and it was addressed to Prince Birabongse Bhanudej Bhanubandh. Inquiries revealed that the man who had died on the station platform was indeed a prince – a prince of Siam. When Prince Bira (much easier to type) was born the country was called Siam. In 1932 it was renamed and is now Thailand.

Prince Bira had been sent over to England to be educated when he was a boy and spent most of his life there. And fifty years before that fateful day in the railway platform he had made his debut as a racing driver.

His name became a part of history when he competed in the first-ever World Formula One Championship at Silverstone in 1950. Five years later he retired from racing and then competed in the Olympics in sailing events. Quite a bloke really and certainly not the little tramp that some people thought when they saw him on his last day.

He was the first Formula One racing driver to come from Thailand and remained the only Thai driver in the series until Alex Albon made his F1 debut in 2019.

But there’s one other interesting thing about Prince Bira. His grandfather was King Mongkut of Siam and it wouldn’t surprise me if you’ve never heard of him. (He, according to Wikipedia, had 82 children. Yes, 82). And the (rather good) film The King and I and the Yul Brynner character were loosely based on him.

There are so many fascinating buildings in London, For travellers interested in architecture, London is without doubt a feast. But among the important, historical and ancient, there are buildings and structures that have stories to tell about relatively recent times gone by. The tube station at Bounds Green is an example.

WHERE IS BARONS COURT TUBE STATION?