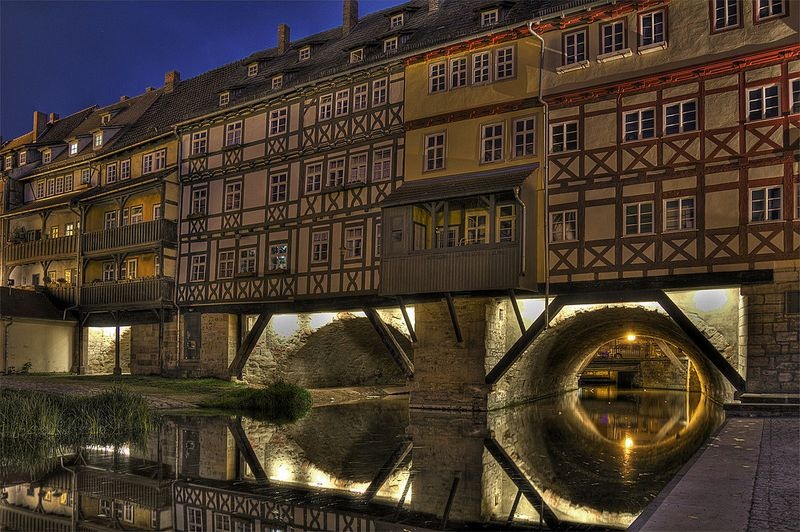 Krämerbrücke means “Merchant’s Bridge’ and this particular bridge is more like a small village spanning the river Breitstrom. It’s located in the city of Erfurt – which still has much of its original medieval architecture.

The original bridge was build before 1110 and was constructed of wood. It served as a thoroughfare for traders and for those making pilgrimages and even in those early days, merchants set up their businesses on the sides of the bridge to make the most of the busy foot traffic.

The problem was that every few years the bridge would be destroyed or badly damaged by fire and this eventually led to it being rebuilt in stone. Almost two hundred  years later, in 1472, the bridge was rebuilt and can still be visited today.

When it was reconstructed the bridge was made considerably wider with narrow half-timbered buildings on each side with a narrow roadway running down the middle.  The upper levels of the buildings that line the bridge are residential apartments. Today the businesses on the bridge include fabulous cafés, craft workshops and artisan food sellers and artists’ studios.

Meet just four of them in the video below

See more tips in the video below. And make that hand crafted chocolate a must!

← Monaco on a Budget Have You Considered a Cycling Tour? →

Trending Now : You've Seen It Before: You Have, You Have!