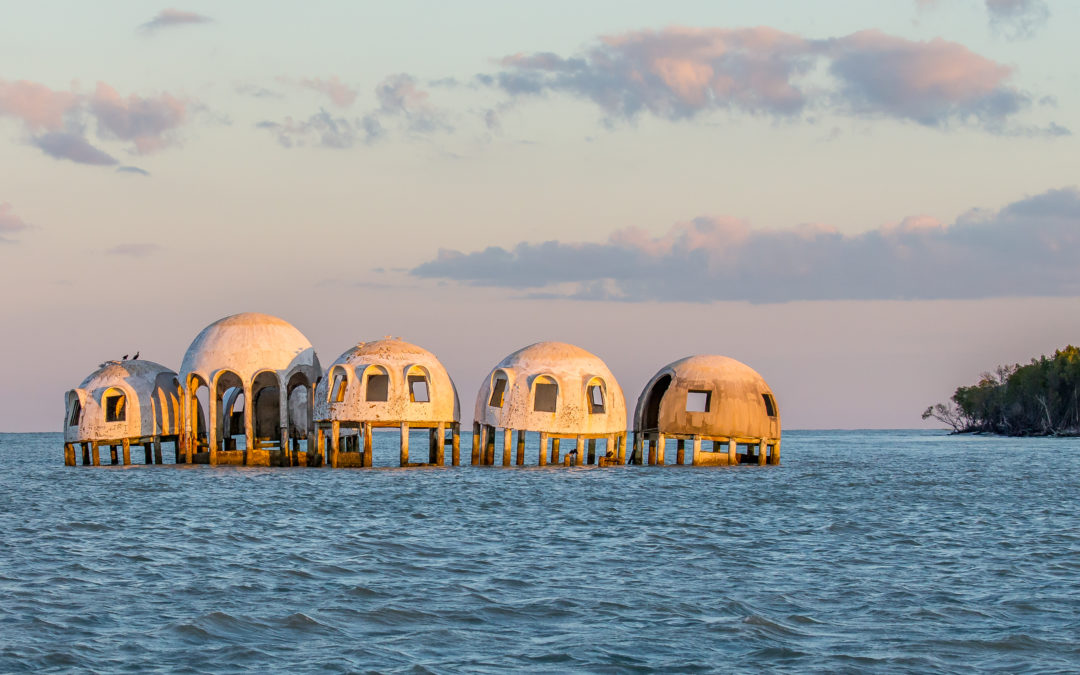 Some people think that they were built by aliens but the fact of the matter is that the Cape Romano Dome House, now abandoned, was built in 1980 by an American businessman named Bob Lee. (I’ll admit that the alien story is more romantic though).

I imagine that many of us have dreamed about building our ideal home and the Dome House was Bob’s dream that he made reality. He built the structure on Caxambas Island in Florida – just south of Marco Island.

The house was his own design and was built to be sustainable and to endure the oddities of Florida weather. And what a wonderful location.

Over the years the beach has eroded so the remnants of the Dome House now appear to be floating in the water but originally it was built on an isolated sandy beach.

Dolphins swim in the water and there’s an amazing array of local seabirds and wildlife. The climate, of course, is Florida-perfect.

The house is made up of six connected domes and Lee created several systems to make the home as self-sufficient and eco-friendly as possible. For example, rainwater and morning dew would run off the curved walls and be collected in a water tank that was used in the household. Solar panels provided power.

Bob Lee lived there with his family and the first video below features some fascinating photographs of the house when it was fully furnished and lived in.

The house was designed to resist the ravages of hurricanes although, in 1992, Florida was hit by the strongest and most destructive hurricane to date; Andrew. There was hardly any damage to the structure of the home thanks to its design but the winds and water were able to enter through the damaged windows.

The interior of the house was ruined and abandoned by the Lee family.

How to Find the Cape Romano Dome House

JJ is originally from the UK and has lived in South Florida since 1994. She is the founder and editor of JAQUO Magazine. You can connect with her using the social media icons below.
← Visiting Sweden. Slottsskogen, Gothenburg Chattanooga Choo Choo Hotel. →