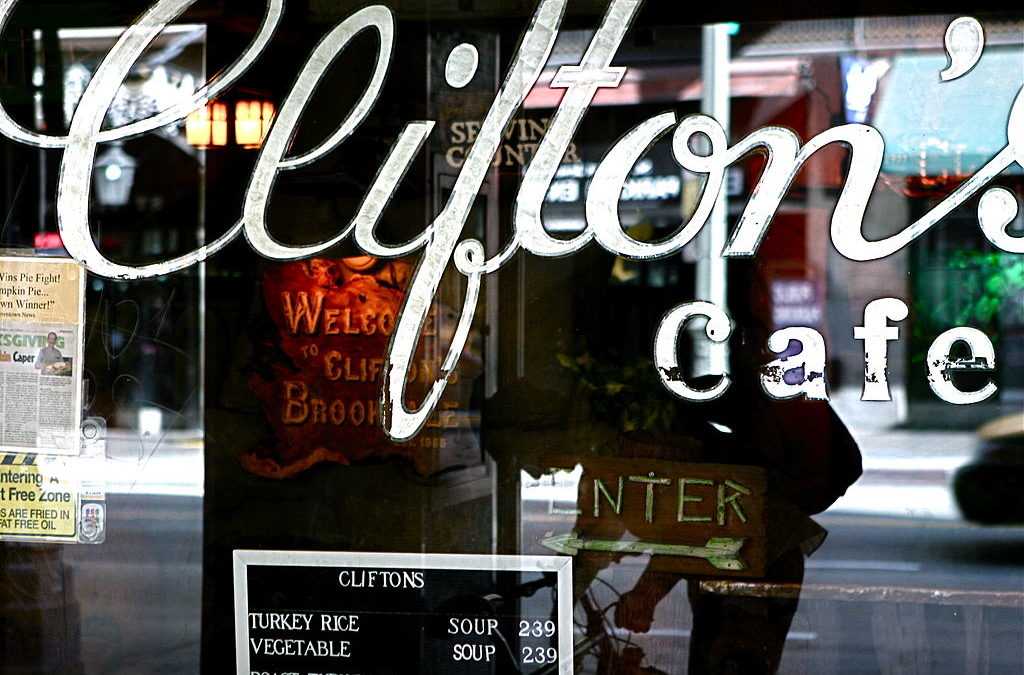 You don’t really expect calling in for a bite at a cafeteria to be a weird experience. That is, unless you’ve been to Clifton’s. The best way to find out about it, apart from walking through the doors of course, is to take a look at the video below. That shows you exactly what sort of experience you can expect.

At one time, it was part of a chain of eight but now is the only Clifton’s remaining.

The founder was a curious and rather exceptional man. He came from a family of restauranteurs – who put their careers on hold to be missionaries in China. They took their children with them.

Clifford Clinton – he combined his twp names when creating his chain of cafeterias – ran his empire according to his Christian beliefs. He asserted that no one should go hungry and therefore fed people who couldn’t afford to pay in his eight cafeterias. His boyhood experiences in China had taught him that he was in the fortunate position to help others.

In the 1940s he co-founded Meals for Millions, an organisation dedicated to feeding the hungry. (It still exists – here is its website.)

In his cafeterias he had the philosophy of allowing diners to pay what they throught the meal was worth – or even pay nothing at all if they couldn’t afford to. In print, in his premises, he said “regardless of the amount of this check our cashier will cheerfully accept whatever you wish to pay – or you may dine free.”

Needless to say, the business teetered on the brink of bankrupcy but in hard times fed tens of thousands of hungry people who othwerwise simply couldn’t afford to eat.

Can you imagine that sort of thing happening today?

← Visiting the UK: Ye Olde Trip to Jerusalem Why Do Sensible People Let Strangers Stay In Their Homes? →