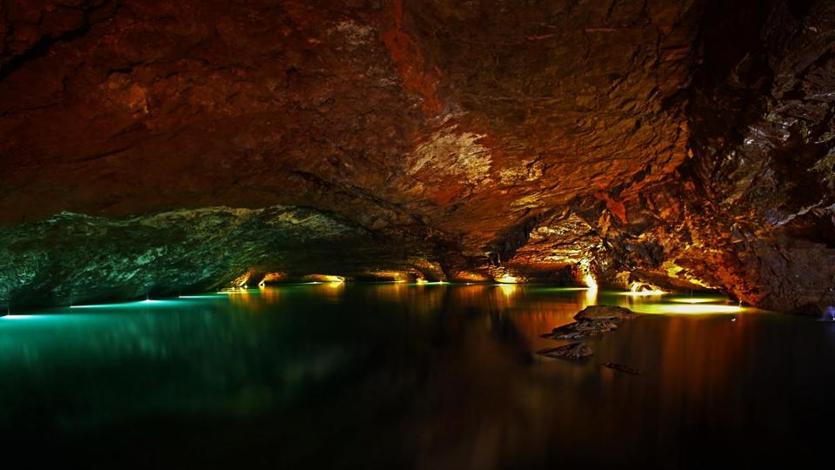 The Craighead CAverns are a series of underground caves and huge enclosed areas that make up an extensive cavern system, complete with huge underground lake. The Lost Sea, as it is known, is the largest underground lake in the USA and the second largest in the world.

The underground area has a long and varied history. Native American artifacts have been found there which strongly indicate that one of the huge caverns was used as a meeting place for various tribes in days gone by.

Bones have even been found that were discovered to those of a Pleistocene jaguar – Pleistocene being the official designation of what we usually refer to as the Ice Age.

Amazing to think, but this entire area was once under the ocean.

Today it’s a tremendously popular place for tourists to visit. The tour includes a journey across the lake on a glass-bottomed boat. A fascinating fact is that the many rainbow trout that live in the lake are blind. Because they have always lived in the subterranean lake, they have no need for eyesight.

But one of my favourite stories about the caverns (and there are many stories – that you’ll hear from your tour guide when you visit) dates from the 1940s. Enterprisingly, the largest of the caverns was converted into a dance hall and bar. It was called, unsurprisingly, the Cavern Tavern.

It became very popular and it’s said that the 30′ height of the chamber made the music fantastic because of its special acoustics.

This had such an effect on them that many would simply give up the idea, return to the cavern and stay there sleeping it off until the effects of the alcohol had worn off.

HOW TO FIND THE CRAIGHEAD CAVERNS

← Travel: It's Different There. (And It's Supposed To Be) Airbnb: Be Sure To Choose the Right Accommodation →