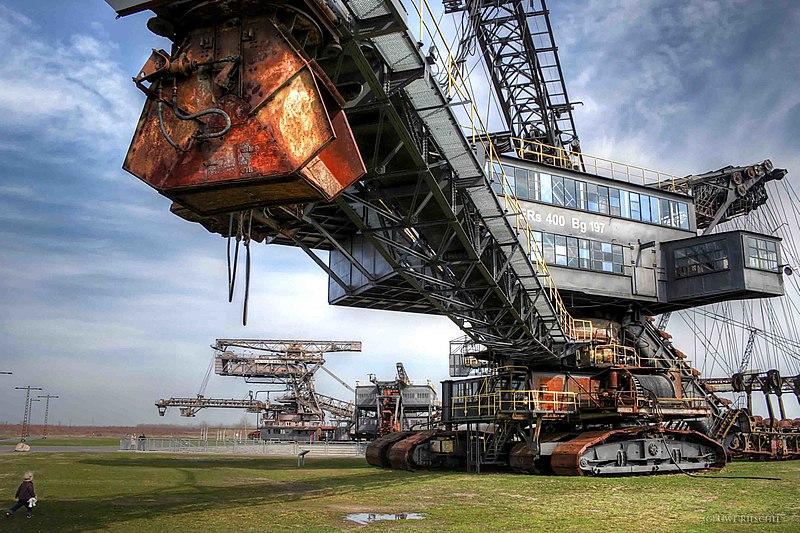 Okay. Recently I wrote about the Shivering Sands Army Fort and described it as one of the spookiest places I’ve ever seen. Actually, it’s a toss-up – England’s Shivering Sands or Germany’s Ferropolis.

You can get a glimpse of what the place is like from the image above. And note the little boy in the bottom left-hand corner. He gives you an idea of scale; some idea of just how huge that big rusted hunk of metal machinery really is.

It’s one of five decommissioned hulking machines that, until their retirement in 1995 were part of a huge strip-mining operation in Gräfenhainichen in Saxony. When the mine closed down, I imagine that someone somewhere planned to haul the machines away if only for their scrap metal value

But perhaps it proved to be too expensive? But whatever the reason, the five beasts were abandoned and left to rust. The mine shaft itself became filled with water and the area is almost completely surrounded by water too, being located on a spit.

In some countries, that would be the end of the story but the German authorities recreated the area into an open-air industrial museum. Strip mining had been happening in the area for over 150 years and was a valuable part of the local economy until the 1990s when it proved to be uneconomical.

It has become an event arena that can hold up to 25,000 people that’s used for rock concerts, drifting events and festivals. There’s an education centre, huge murals showing the portraits of miners who worked there when it was a going concern. It holds flea markets and, in 2020, a socially-distanced drive-in  Ascension Day service.

Another 2020 initiate is to allow camping on the premises. With many families wanting to travel in their own RV or tent, to avoid COVID, the museum\has opened up its ground for them. There are all the facilities you’d expect from a camp site. Also, drive-in movies have been shown there to keep families safe.