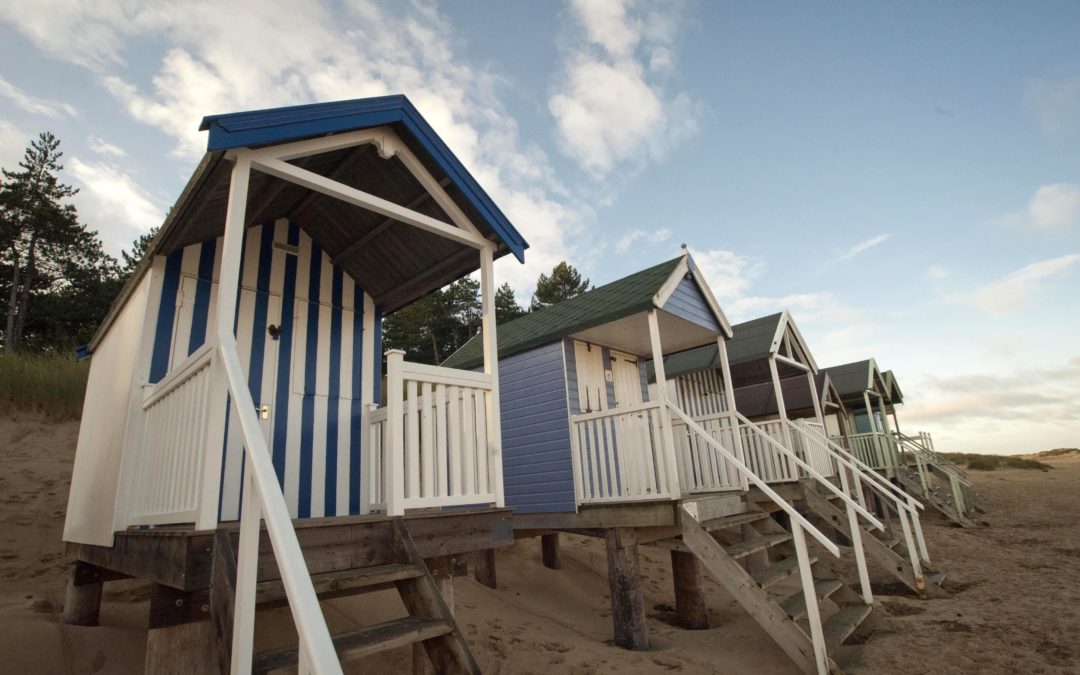 Although shelters and huts can be found on beaches throughout the world, the beach hut remains an icon of the British seaside. In some British beach locations, they have evolved from fishermen’s huts or even from bathing machines – that nineteenth century method for bathers to preserve their modesty at the seaside.

Some date from much later and in some places, the Beach Hut Bandwagon means that new ones have been built.

The British, being an island people, have always felt at home by the sea. And in the eighteenth-century, doctors started to extol the virtues of seawater and sea air for health.

It maintained general health, they said, and promoted healing the recovery for patients.

Mostly, we English largely believe this to be true.

Sudently, going to the seaside became a popular event. During the Victorian era, when there was such a great development of the railway network, almost everyone could afford to spend some time by the sea, even if it was simply for a day out.

In the twentieth century, beach huts were incredibly popular. King George V and Queen Mary enjoyed a beach hut in Sussex, actor Lawrence Olivier was an aficionado and crime writer P D James used a beach hut as her study.

After the Second World War, their popularity increased. Queen Elizabeth ll owned one in Norfolk, artist Tracey Emin too was an owner and a news report a couple of years ago claimed that Rolling Stone Keith Richards was purchasing one on the south coast.

So what’s the attraction?

English people love to spend the day on the beach. Local authorities have usually provided the necessities of life close to beach areas but you know the old saying – an Englishman’s’s home is his castle. And what could be better than being at the beach in your own private space? Sometimes rented, sometimes bought, but your own space nevertheless.

Your beach hut is your base for the day. It shelters you from the sun if needed – or from the rain. It’s the perfect place to change into your swimming gear and then afterwards dry off and dress. You can make a cup of tea and use the hut as a base for your picnic meals. All right on the beach.

It’s the ideal spot if you have kids. You can sit in your deckchair just outside the hut watching them play safely and yet you’re still on hand if they need jellyfish-sting salve, a thick ear or a kiss better.

If you own your beach hut, or if you have a longish lease, then you can keep all your beach bits and bobs there year round so there’s no need to find and pack everything when you fancy a day out.

If you’re not lucky enough to have a beach hut of your own then you can still join in as most local authorities own beach huts that they rent out on a day by day basis.