The Dead Body at the Hollywood Wax Museum 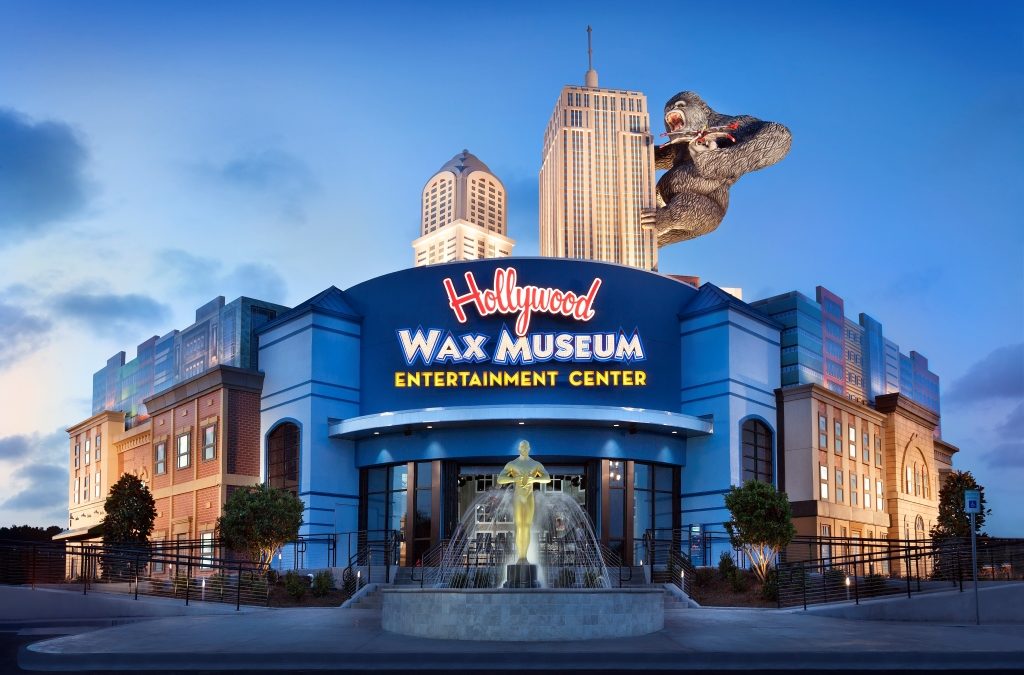 Today there are four branches of the Hollywood Wax Museum. The one above, for instance, is in Myrtle Beach. For the other locations, see the map below.

Maybe you think that you wouldn’t be seen dead at a kitsch-y wax museum. But maybe Elmer McCurdy thought the same – but he was. Seen dead there, that is.

So if your family has outvoted you and against your better nature you end up at one of the four Hollywood Wax Museums throughout the USA, the story of Elmer McCurdy is a great one to relate to them. It’s suitable creepy too.

Elmer is no longer in residence – he is respectably buried at the Boot Hill section of the Summit View Cemetery in Guthrie, Oklahoma but he was once – well, his body was once – unknowingly on display at the Hollywood branch of the wax museum. Let me explain.

Elmer had been born back in 1880. When he was a teenager he found out that the people he thought were his parents weren’t – he discovered that his mother had been seventeen at the time of his birth and that his father was unknown. This led the teenaged Elmer into an unsettled life.

He became a drifter and took various odd jobs. He had a spell in the US Army but on being discharged, he embarked upon a short – and unsuccessful – career as a bank and train robber. The problem was that he wasn’t very good at either.

His last attempt was that of robbing a train which, it was alleged, had tens of thousands of dollars on board. Except the train the McCurdy and his colleagues held up was the wrong one. It was a passenger train carrying nothing but people.

The gang hid out in a barn but the law discovered them and McCurdy was shot in the ensuing gunfight. This was in 1911 and McCurdy was 31. He never made it to 32 as he died of a single gunshot wound.

A local undertaker took the body, preserved it, prepared it for burial and waited for the next of kin to claim it. But no one did.

The undertaker refused to bury the body until he had been paid for his services but as no one was willing to do so, he displayed the body, charged a fee for people to see it and hoped to recoup the cost of his embalming materials and expert time that way. as the ‘bandit’, the ‘mystery man’ and the ‘outlaw’ it proved to be a popular attraction.

But eventually, a man claiming to be McCurdy’s brother turned up and claimed the body. Brother? Nonsense. He wanted the body for a sideshow in his travelling carnival.

What with one thing and another, the body was passed from pillar to post – gradually becoming less savoury in appearance – until it was sold as one of a job lot of wax figures to the Hollywood Wax Museum.

The owner thought that the battered body just wasn’t lifelike enough so relegated it to sitting in a dark area of the funhouse.

But in 1976, the body was accidentally moved and its arm fell off. It was only then that bones and sinew were spotted and it was apparent that this was a real mummified body and not a wax dummy.

What a fabulous story to entertain your companions, should you find yourself at a wax museum!

WHERE ARE THE HOLLYWOOD WAX MUSEUMS?

Trending Now : Which Country Has a Newspaper Called The Penguin News?