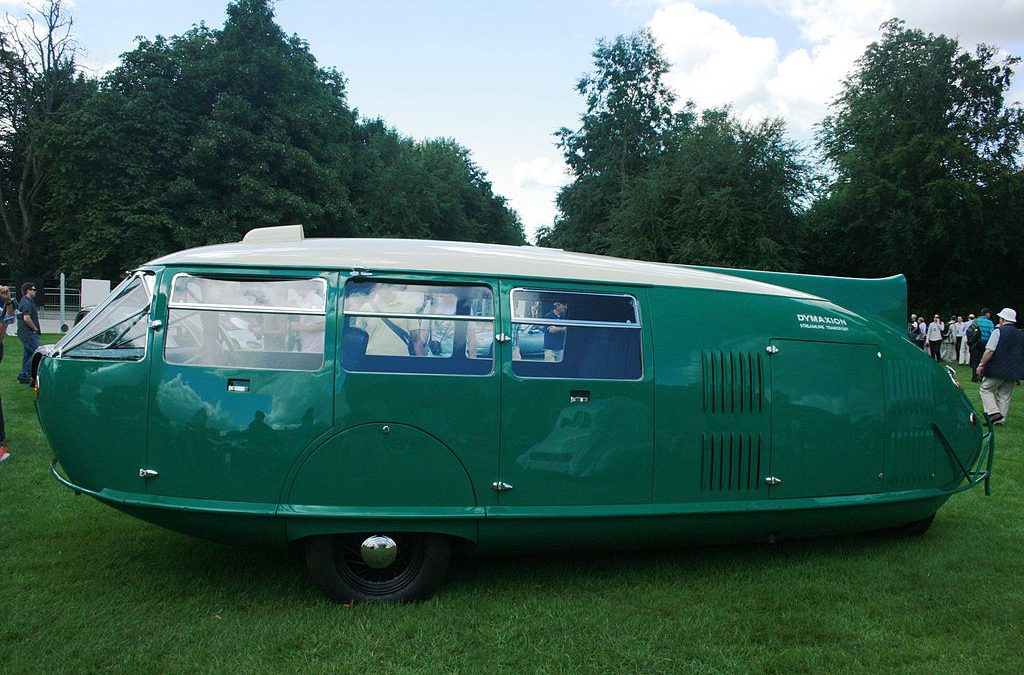 The man who is credited as its inventor, Buckminster Fuller, doesn’t describe the Dymaxion as a mere car. This is because it was intended to evolve further into a flying vehicle. Unfortunately the technology to create this was not available in the 1930s when the Dymaxion was made.

That being said, only three were ever built. And only one remains – which can be seen at the National Automobile at Reno.

It’s a pretty astonishing sight these days but when you think about what cars looked like in the 1930s, you can see why it proved to be a genuine spectacle when test-driven on the streets. (See the video below).

The version of the vehicle on display at the museum is prototype number two. Prototype number three is assumed to have rotted away somewhere and dramatically, prototype number one was involved in an accident in 1933 which killed its driver. (The other vehicle involved was deemed to be at fault, not the Dymaxion).

Incidentally, the driver was a well-known racing driver, Francis T Turner. A passenger, seriously injured in the accident was Scottish peer and spy William Forbes-Sempill. He was evidently on his way to catch the Graf Zeppelin home to Britain. I know, this story just gets weirder, doesn’t it?

The other passenger, Charles Dollfuss, was an aviation specialist who achieved his balloon pilot license in 1911. Accounts vary as to whether or not he was injured in the crash although he definitely survived as he continued ballooning until he was in his eighties.

Buckminster Fuller was a rather eccentric character and he had collaborators in creating the vehicle. One was renown yacht designer William Starling  Burgess, a much-married man who allegedly (although I don’t believe it) invented the Times New Roman font.

Another collaborator, by the way, was Isamu Noguchi – better known for his iconic coffee table.

So even its inception was a bit of an oddity.

Noguchi used a Dymaxion when he went on an extended road trip in 1934 with his then-mistress, Dorothy Hale. A couple of years later Dorothy dramatically died when she jumped (or was she pushed?) from her high-rise apartment in New York.

The death was graphically illustrated in a Frida Kahlo painting – Kahlo also having once been Noguchi’s mistress. Dorothy Hale had a party the night she died. Both Noguchi and Buckminster were there. When her body was discovered, she was wearing a corsage of yellow roses, also depicted in the Kahlo painting, which had been given to her by Noguchi.

Which has nothing to do with the car; just a little trivia…

Much of the museum’s collection originally belonged to William Harrah. Harrah founded a gaming and casino company that was bought out in the 1980s by Holiday Inn.

The museum is therefore sometimes known as the William F Harrah Automobile Museum.

In addition to fine cars, Harrah obviously also enjoyed the company of fine women. He married seven times, although this was to six different women only. However, one of his wives (he married her in 1969 and they divorced in 1970) was the American singer/songwriter, Bobbie Gentry – known for her song ‘Ode to Billie Joe’.

WHERE IS THE NATIONAL AUTOMOBILE MUSEUM?

← Colditz Castle, Germany Hosts: How To Discourage Kitchen Use →