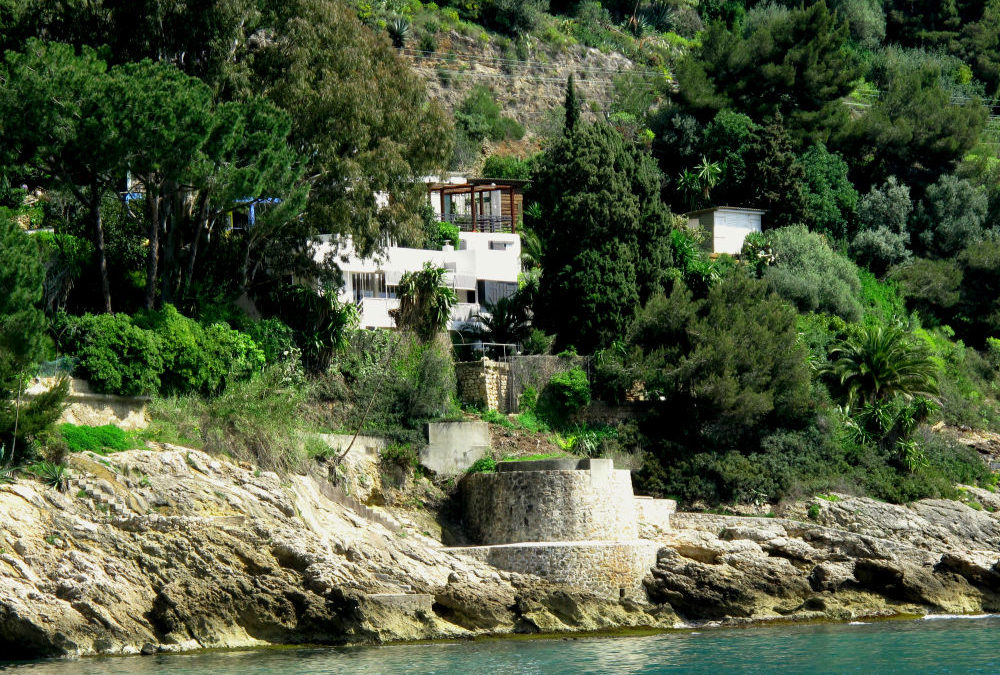 Incredible Irish designer Eileen Gray designed the house that I – and plenty of other people too I’m sure – would describe as a dream home.  Completed in 1929, the house overlooks the sparkling blue sea.

It was a labour of love – more about that in a moment. She scoured the area on foot looking for the ideal place to build the home she had designed.

Mostly Eileen Gray preferred women as romantic partners but she designed and built the villa for herself and her current (male) lover to enjoy. Jean Badovici was an architect and quite a few years younger than Eileen and he had encouraged the designer when her interest in architecture grew.

In fact, it must have struck you as curious that the house is called E-1027 and not Ye Olde Rectory – or its Gallic equivalent. The name is a code. The E (of course) stands for Eileen and the numbers reflect the couple’s initials by their position in the alphabet. 10 indicates J, the 10th letter in the alphabet, 2 denotes B and 7 represents G.

Quite romantic in a schoolgirl sort of way.

The relationship wasn’t to last but on the fringes of the story was Badovici’s friend, Charles-Édouard Jeanneret-Gris. However, Charles-Edouard was also a designer and architect – a man who was a little strange when it came to women, a man who changed his name to Le Corbusier.

Yes, the man who is now known as a pioneer of modern design was a visitor to E-1027 and also had a bit of a problem concerning his hostess.

He adored the house. He admired its design and location hugely. But he was also an arrogant man. It was bad enough for him to realise that a ‘mere woman’ had created such a fabulous building. But to add insult to injury, he fancied the pants off her.  However, as she preferred women – or younger men – her pants were staying firmly in place.

When Eileen and Jean’s relationship ended, she moved out of the house but Le Corbusier continued to visit. Over the next few years, as a guest, he painted eight large murals on the walls of the house.

Eileen Gray was furious about this. Architecture critic Rowan Moore called the painting of the murals ‘an act of phallocracy’. (I had to look that up to double check and yes, it means what you think it does).

The house was eventually designated as a historic place but in the meantime it had a squalid history. Its walls were used by German soldiers as target practice in the Second World War, it was the scene of a murder and squatters largely destroyed the interior.

And strangely, in 1965 Le Corbusier was found dead on the shore nearby.

He had tried to purchase E-1027 but had been thwarted. He bought a piece of land locally and stayed there in a cabin. One morning in 1965 – he was 77 by that time – he went swimming against his doctor’s advice. It’s thought that he had a fatal heart attack.