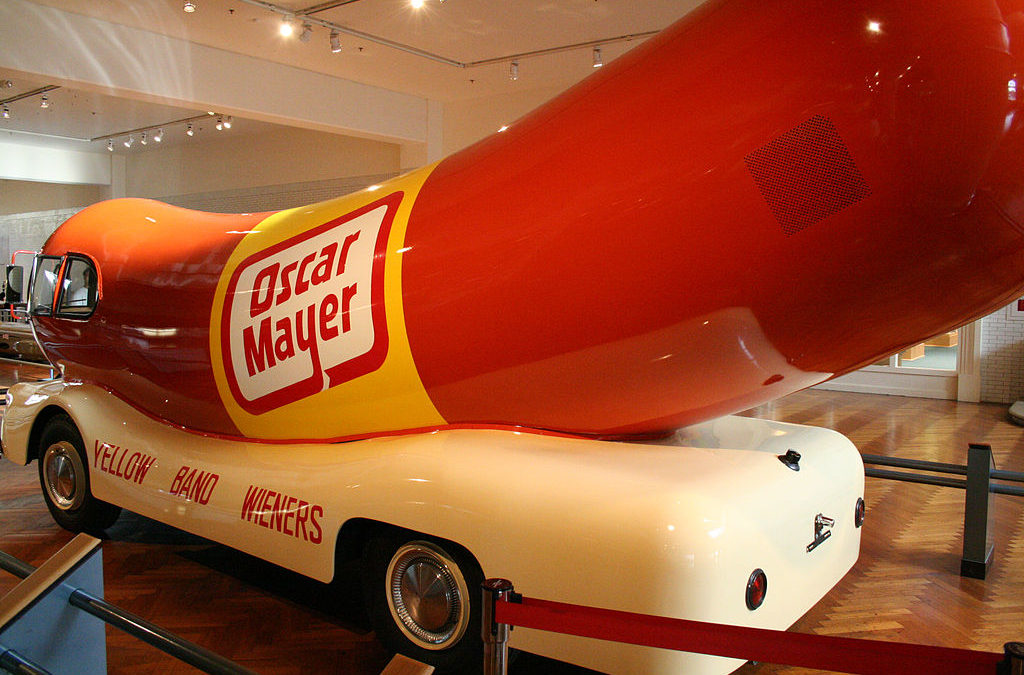 If you’re American, you might not be as gobsmacked by this as I am. To me, it comes into one of those only-in-America categories. But the Wienermobile – for that is what the vehicle you see illustrated is – really is a thing.

I admit that I had to go to Google to find out exactly what a wiener is.  I  discovered that the dictionary has two definitions. The first one describes a sausage – a hot dog sausage. The second says that wiener is a slang word for penis.

This does not mean that the vehicle to see here is a penismobile despite its looks. No, it’s an advertising vehicle for a well-known brand of hot dog sausage.

The wienermobile seen in the photograph – and the video below – was built in 1952 and now lives in the Henry Ford Museum at Dearborn, Michigan.

Now you may have noticed that I am using the present tense when referring to wienermobiles – that’s because they are still around. They still trundle around American advertising the sausage.

The wienermobile was, more often than not, driven by a midget actor, George Molchan, who travelled the country promoting the Oscar Mayer wares. As part of his promotion activities, he used to hand out brown whistles – wiener shaped of course. You really couldn’t make this up, right?

These whistles, which bore the company logo, when blown would produce the Oscar Mayer signature tune.

Bizarre as these facts are, I think the following really is the icing on the cake:

When Molchan was buried in a Merrillville, Indiana cemetery on April 16, 2005, Oscar Mayer sent one of the Wienermobiles to the cemetery, where it was parked near his gravesite during the ceremonies. Molchan’s mourners also sang “Oh, I wish I were an Oscar Mayer wiener”, and followed it with wiener whistle toots of tribute.

THE 1952 WIENERMOBILE CAN BE SEEN AT THE HENRY FORD MUSEUM, DEARBORN, MICHIGAN

← Stay With Prince Charles At The Castle Of Mey, Scotland Villa E-1027, France →