It’s not often that anyone can use the phrase ‘you’ve seen the chair, now see the house‘.  But I really imagine that most of us  know the chair. Look at the image of the house above – doesn’t it have familiar design features? The chair? Oh, here it is: 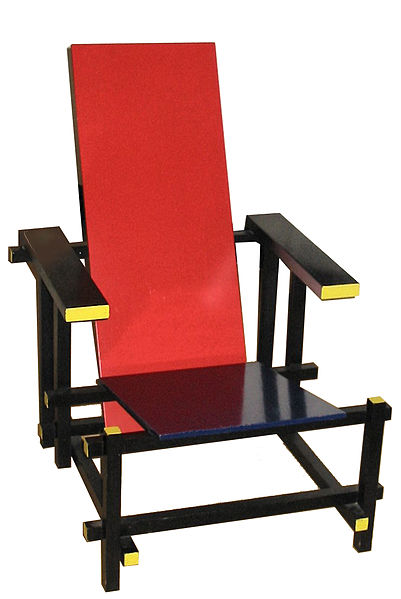 Designed in 1917, it became very well known in the early part of this century when it was sold, of all things, as a cell phone stand. But the De Stijl Art Movement, of which it is a wonderful example, was a seriously influential creative force in The Netherlands during the early part of the twentieth century.

The house which was built in 1924 is now a museum and open to the public. It’s fascinating in that the house is built using a very open-plan concept – the two floors are large open spaces that can be divided if necessary using folding screens. However, the story behind the house is equally interesting.

When he was a young man, Gerrit worked for his father – a cabinet-maker who created traditional, heavy, Dutch-styled furniture. One regular client was a wealthy lawyer, Frits Schröder and his young wife Truus. And she hated her husband’s taste in furniture.

Truus was a very modern woman in every respect. She was a minimalist, a creative person and was forthright. She trained as a pharmacist before her marriage.She had been brought up mostly in a convent boarding school and it may be that she married her older, prosperous husband for a level of security. But the marriage was always difficult because of their opposing opinions.

During the course of delivering a new and horribly ornate desk, Gerrit met the young Mrs Schröder and they discovered to their delight that they both hated the traditional furniture and had much more modern tastes. When her husband died, Truus Schröder Commissioned Gerrit – now a working architect and designer) to build a house for her and her three children. The house you see above was the result.

The locals weren’t impressed though and referred to it as the ‘crazy house’. Even Truus’ three children didn’t like the place (children can be so conventional).

But the relationship became more than that of a homeowner and architect. When Gerrit’s wife died in the 1950s he moved into the house with Truus. The couple lived together until his death.in 1964. Truus, who loved the house, continued living there until her own death in 1985.

How to Find The Rietveld Schröder House

JJ is originally from the UK and has lived in South Florida since 1994. She is the founder and editor of JAQUO Magazine. You can connect with her using the social media icons below.
← Flyotto: Uber for Planes So, You Don't Speak the Language? →