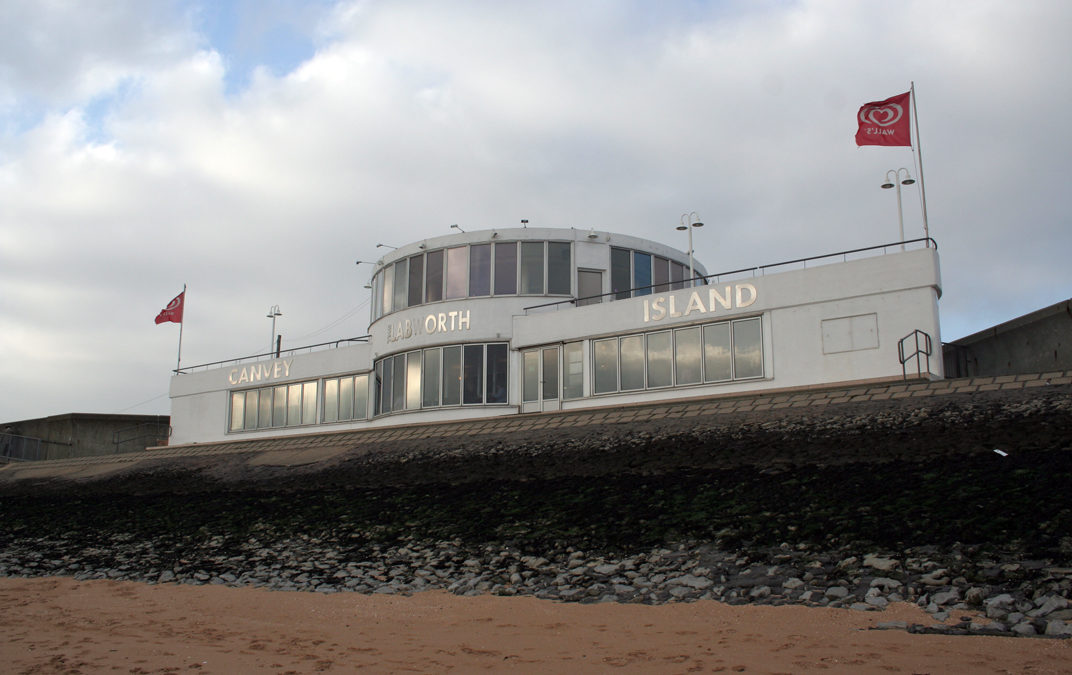 If I told you that the connection between a Swedish water tower and a café in Canvey Island, Essex, UK, was the Sydney Opera House then you’d probably think that I’d lost it at last. Fair enough. But read on.

Canvey Island in Essex is not really the sort of place that hordes of discerning visitors flock to. One great reason though is to admire the architecture of the Labworth Café – now reinvented as the Labworth Restaurant.

This fabulous building was created in the nineteen thirties by English engineer Ove Arup – a man who Wikipedia describes as among the foremost architectural structural engineers of his time. (Yes, he was English – born in Newcastle – but his mother and father were Norwegian and Danish respectively).

At the time the café was built – 1932 and 1933 –  Canvey Island was a bustling holiday resort. Not far away from London and its suburbs (see the map below) it was easy to access for even a day out. The café, in addition to providing nourishment for the visitors, was partly a shelter.

You can see it in the photograph below.

Arup designed the building to resemble the bridge of the Queen Mary, a British ship now restored and used as a hotel in Long Beach, California.

Over the years though, the English holiday resorts fell out of favour. In the seventies, many people thought that places like Canvey Island were old-fashioned resorts – the places that their aged parents and relatives used to visit in the ‘old days’.

Package holidays to Europe, mostly Spain’s Costa Brava, were becoming increasingly popular and few people were interested in those old-fashioned resorts. The result was that many attractions and buildings, including the café, fell into disrepair.

Despite this, it was designated as a listed historic building in 1996.

Now though the building has been restored and has become a restaurant of some renown. Here’s its don’t-use-any-capitals website.

Oh yes, the Sydney Opera House – Arup was the design engineer involved with the building of the opera house. The architect was Jørn Utzon who also designed (of all things) a rather gorgeous water tower.

Built in 1933, the Grade II Labworth Cafe on Canvey Island is the only building designed solely by Ove Arup.

He is best known as a structural engineer, and a new book explores the role of his consultancy, Arup Associateshttps://t.co/nO0PeptzyS pic.twitter.com/irbvz8Sqsx

BUT WHERE ON EARTH IS CANVEY ISLAND?