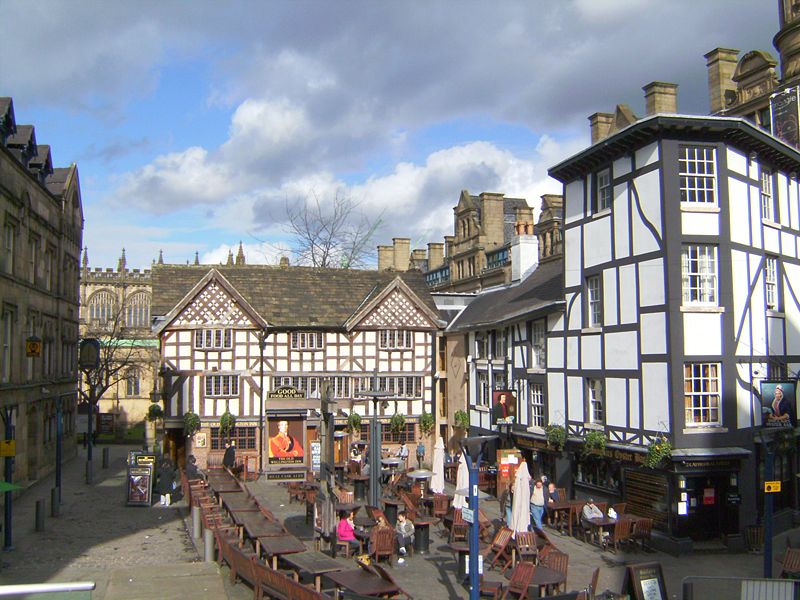 When you visit Shambles Square in Manchester, especially the Old Wellington Inn and Sinclair’s Oyster Bar, you’ll be wrong if you feel that you’ve gone back in time. You haven’t. Well, you sort of have done. Oh how tricky, let me explain…

Yes, the buildings are extremely old – the Wellington was built in 1552. And when you’re ordering your pint standing at the bar, you’ll be standing just where countless others have done throughout history. Except you won’t be. Sorry, I’m doing it again…

You see the pub and Sinclair’s were built a few hundred metres away.

They were moved to their present location when much of the area was rebuilt after the 1996 Manchester bombing by the IRA. And it wasn’t the only narrow escape the building had managed. Both buildings also survived the 1940 Manchester Blitz.

The Old Wellington and Sinclair’s weren’t originally located at right angles to one another but were side by side. The Sinclair’s building is a few decades younger than the pub and both buildings now enjoy protected status. (Not that this would have been any protection from Nazi and IRA bombs).

Both buildings also had an upheaval in the 1960s when the area in which they then stood was redeveloped. During the redevelopment, the buildings were jacked up onto a concrete raft. This helped to stabilise them when they were moved thirty years later.

Although the Old Wellington in times gone by would be a fascinating place to go to if we had a time machine, I suspect that most of us wouldn’t enjoy the closing hour. At one time, the pub closed at 8 pm sharp. The landlord was a stickler for timekeeping too. At least today you can enjoy a pint until a civilised hour.

The video below features still photographs from the Manchester Blitz in the Second World War. It shows how incredibly lucky the old Wellington and the Sinclair Oyster House were to survive the devastation.

WHERE IS SHAMBLES SQUARE?