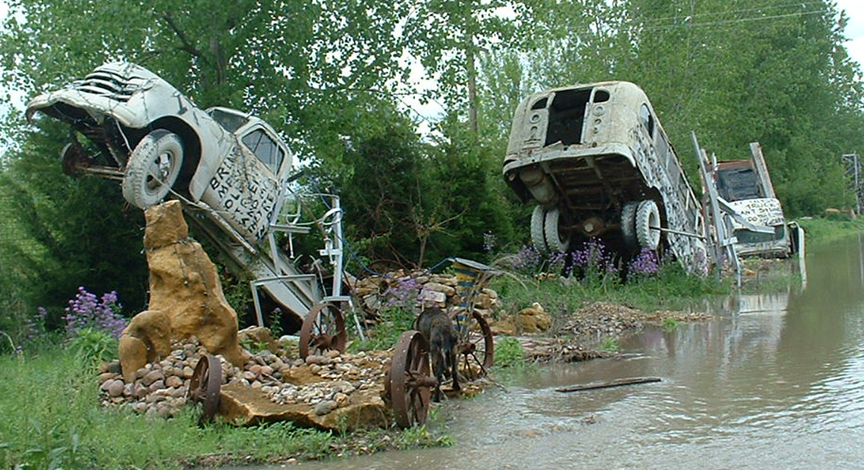 At the end of the last century, Ron Lessman, a native of Topeka, was farming the land that his family had owned since the 1870s. he had also built up a small collection of antiquated vehicles – a handful of old pickup trucks and an old bus.  The authorities did not approve of what they saw as an unofficial junkyard.

In fact, it ended in a court case and the final comment from the judge was that Ron must ‘pick up the trucks’. So he did. But not in the way the judge had intended. He upended them all and wrote slogans on them, converting the junkyard into an art installation.

This gave Ron a taste for bizarre art installations and now the Lessman’s Farm & Catfish Pond has several more – for instance Beer Bottle City – a series of sculptures created from, of course, beer bottles. There’s also Boathenge – using the same concept as the original but this time using upended sailing craft.

Within just a few years the Shawnee County Recycling and Preservation Association designated Truckhenge as officially part of the Kaw Region Art Park. Although Ron claims not to be an artist.

However, visitors come away from Truckhenge convinced that Ron is probably the most interesting ‘exhibit’ in the art park. You can see him in the videos below.

In this first one, you can meet not just Ron, also his son, wife and friend. You’ll love the guy, He’s nuts.