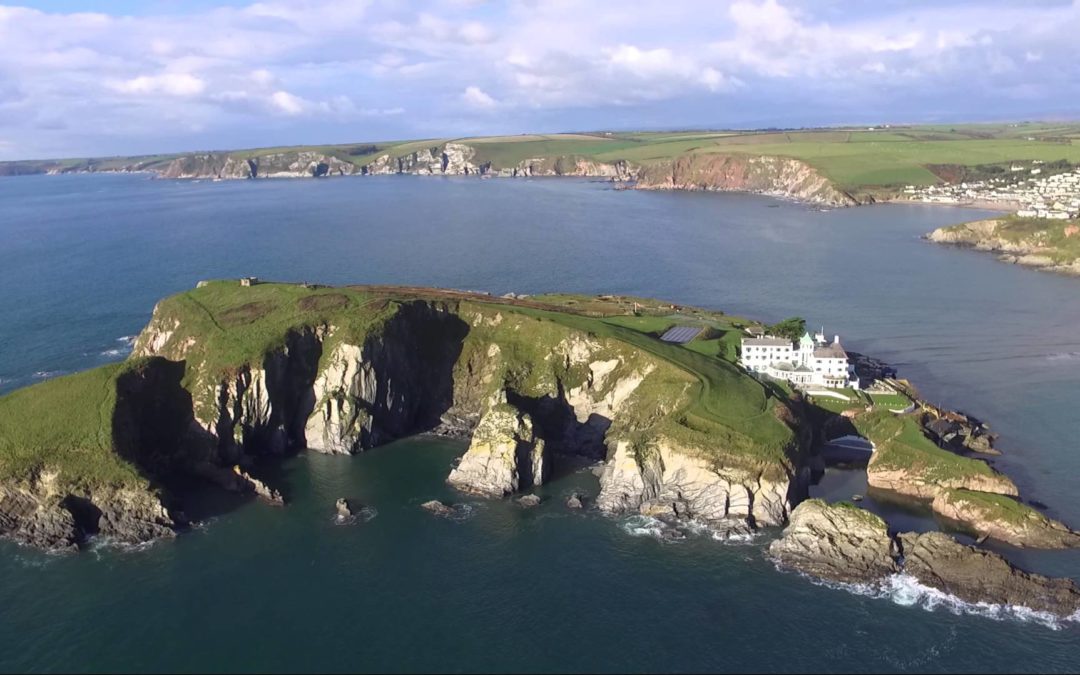 If you can imagine Hercule Poirot investigating a mysterious murder in the Art Deco interior of the Burgh Island Hotel, then it’s no surprise. For one of its illustrious guests in days gone by was Poirot’s creator, Agatha Christie, and several of her novels were inspired by this unusual location.

Other dignitaries were once commonplace here too, such as abdicated king the Duke of Windsor and his mistress – later wife – Wallis Simpson. It’s also said that Winston Churchill met Eisenhower at the hotel in the 1930s. And the hotel typifies days gone by – an age of elegance.

Unusually, the hotel is set on an island just off the coast of Devon although at low tide, visitors can walk across the sands. At other times, the hotel is accessed by the Sea Tractor – a curious vehicle that keeps its passengers safe from the water as its wheels glide in the sand. See the photograph below.

The hotel was one of the most fashionable destinations in the 1930s but the Second World War put an end to that. The hotel was used to house recovering airmen who had been injured and was then damaged by German bombing raids. Sadly, the place fell into disrepair.

It was converted in self-catering holiday flats until the nineties when it was restored to its former glory – and glory is certainly the right word.

Don’t expect this hotel to have modern amenities such as TVs in every room – it has so much more as you’ll be stepping back in time. (Free wifi is available in the public rooms). A three course dinner is included – in the ballroom – in the price of your accommodation, using locally-sourced ingredients, and the dress code is black tie. Many ladies cannot resist a thirties style evening frock. (There are more casual dining options if you wish).

There’s often live music to enjoy (from the 1930s of course) and, as you would expect, murder-mystery evenings. If you visit their website you’ll get a flavour of what this hotel has to offer and the wonderful small-but-fabulous little extras and attention to detail that makes this hotel very special.

JJ is originally from the UK and has lived in South Florida since 1994. She is the founder and editor of JAQUO Magazine. You can connect with her using the social media icons below.
← Truckhenge: Topeka, Kansas Giraffe Manor, Nairobi, Kenya →