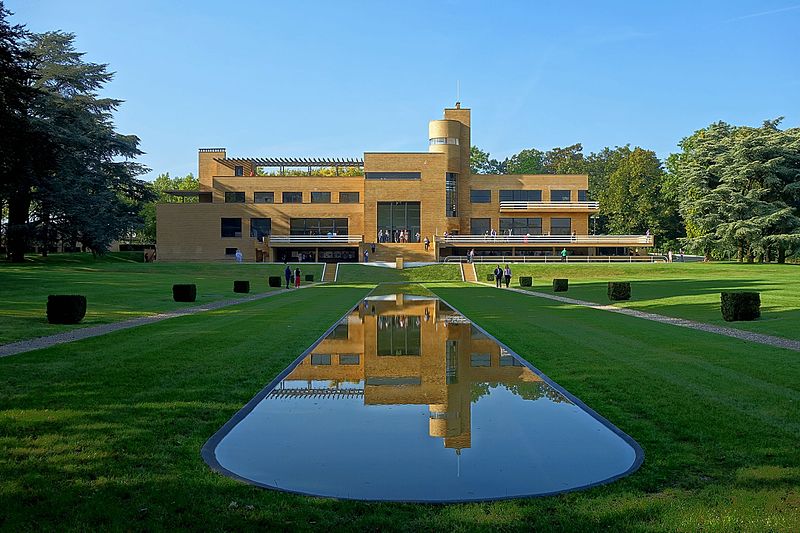 A modern castle – that’s what it was called when it was built. And remarkably, that was seventy years ago. It was seen as being astonishingly modern, nested as it was in the countryside of the somewhat traditional Northern France.

It was created as the family home for a rich industrialist, Paul Cavrois. And yes, it’s a pretty big place for a family but then it was a pretty large family; Mr & Mrs Cavrois had seven children. And with seven kids, there was also a live-in staff to run the home.

Cavrois was a manufacturer of high-end textiles. For several years now the wealthy manufacturers had sited their homes away from the belch and bustle of their factories so there were several other mini-castles in the area. But there was nothing like the building that Cavrois had planned.

He chose the French architect Robert Mallet-Stevens; a contemporary and rival to Le Corbusier.

It may be that you haven’t heard of Mallet-Stevens, whereas Gropius, Mies and Corbusier are much more familiar, and back in the day, the name of Mallet-Stevens was equally well-known. But Mallet-Stevens also had an eccentric streak and left instructions that after his death his archives were to be destroyed.

His name fell from the world of architecture.

During the Second World War, the Cavrois family moved from the house and went to live in Normandy but, as so often happened at that time to beautiful buildings, it was taken over by the German army who used it as a barracks for more than 200 soldiers.

The story gets even sadder because although the family returned and lived in the villa for several years, it was sold off after their deaths to a developer. It then lay abandoned for several years, at the mercy of vandals, nature and time. Here is a quote from the villa’s website:

Squatted, it is vandalized and its precious materials are looted: the marbles are uprooted, campfires burn on the ground, the electrical sheaths rust and the masonry explodes. Trees are growing within the main staircase,

The property was abandoned for over a decade.

It was bought by the state and a painstaking renovation took place. You can learn more about it, and see photographs of how it was before restoration (horrible) and see more in the video on the page here.

WHERE IS VILLA CAVROIS?