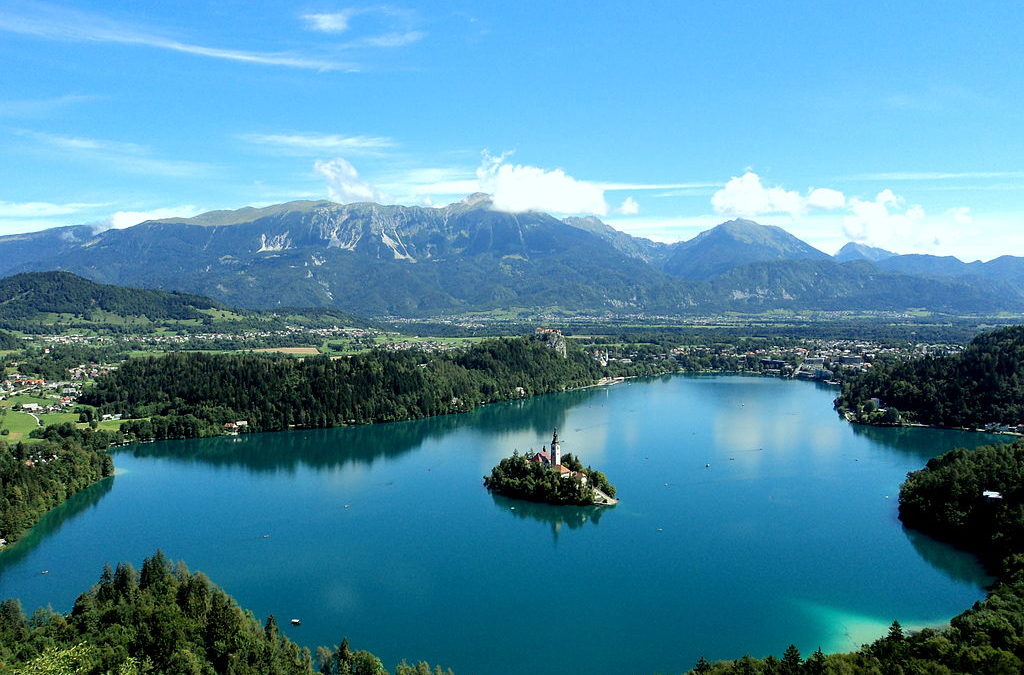 The island is located in the middle of Lake Bled in North West Slovenia and it has a charming story and legend behind it. It goes like this:

The island was originally a the site of an ancient temple dedicated for local pagans to worship Ziva, the goddess of love and fertility. In the eighth century, the temple was torn down and it became a Christian place of worship, dedicated to the Virgin Mary. The church that stands on the island today was built in the eighteen century.

But the bell within its tower is known as the ‘wishing bell’ and its story goes back to the latter sixteenth century when a young widow, Poliksena, lived in the castle on the island.  Her husband had not been universally liked on the island and had mysteriously disappeared one day. It’s thought that he had been murdered.

It’s said that in her grief for her young husband Poliksena gathered together as much precious metal as she could and commissioned a craftsman on the mainland to create a magnificent bell for the church tower in her late husband’s memory.

However, when the completed bell was being transported by boat to the island, a storm wrecked the boat and the bell was lost into the depths of the lake. All the crew of the boat were lost too and legend has it that the bell can still be heard, ringing mournfully from its watery resting place.

But the story doesn’t end there. Poliksena was distraught over the loss of her husband and the fate of the bell she had commissioned in his memory. So she moved to Rome and became a nun.

When the widow died the Pope heard the story and had a new bell created, consecrated and sent to the island for the bell tower. For that day, it’s said that whoever climbs to the bell tower and rings the bell three times in honour of the Virgin Mary will have their wish come true.

Today the church is popular for destination weddings and the happy couple can take part in another tradition as long as the groom is strong enough and the bride brave enough. The tradition states that if the groom can carry his bride up the 99 steps to the church and if the bride is completely silent during the journey, then the marriage will be a happy one.

FIND OUT ABOUT ADVENTURE TOURS TO SLOVENIA HERE